Through Jupiter’s ingress in Capricorn, the year 2019 and especially its second half foreshadowed the supremacy of the Cardinal element, which characterizes 2020 until the end of December, when Saturn and Jupiter settle in Aquarius. By reducing 2020 to a single digit, it appears that this year is dominated by the numerological energy of 4, symbolizing, among others, tradition. With a strong focus on Capricorn, a sign commonly associated with long-standing mainstream values, most of 2020 calls us to build a strong inner and outer core or foundation for ourselves. The most appropriate attitude we can adopt in 2020 is a responsible one, which carefully weighs the risks and benefits of any possible life choice. This way, we can safely and gradually toward our goals.

The first month of 2020 brings about Saturn’s conjunction with Pluto in the sign of Capricorn. This astral event takes place at an interval of about 35 years, and the last time the two planets met was in November 1982. Around this date, the film "Ghandi" was released, which recalls the impact that this historical figure’s social activism had on India declaring its independence in 1947, a year when Saturn and Pluto met again. Their conjunction in the sign of Capricorn promises to bring about substantial changes in the policies of the governing institutions (Capricorn). The foundation of their rigid and coercive structures (Saturn) will be seriously shaken (Pluto) and forced to reform before the end of the year and Saturn’s entrance into Aquarius, which comes with renewal and a greater focus on the pleas of common people.

At a personal level, any status quo is likely to suffer to a lesser or greater extent. It may very well be that many people reconsider the idea of ​​working in a hierarchical system (Capricorn), where they feel inadequate (Saturn) or manipulated (Pluto). We may see a more pronounced tendency of workers to coagulate against oppressive leadership or try their hand at conducting business by themselves. What was initially just a passing idea can be turned by the end of the year into a well-crafted plan to take the freelancing path. Certainly, more and more people will realize that bosses cannot exist without subordinates and that their rights are just as important, if not even more valuable, than their duties. In this way, the current employer-employee power balance is questioned and reformed.

The year 2020 comes with a series of other three conjunctions, formed this time by Jupiter and Pluto, also in the sign of Capricorn. Encountered every roughly 13 years, this astral event takes place in mid-spring (April), early summer (June) and late autumn (November) and supports the energy of Saturn’s conjunction with Pluto. Specifically, we are talking about growth (Jupiter) despite adversity (Pluto), development of a system of government (Capricorn) that has the capacity to retain the functional forms of the previous one and to change what has been proven not to work. But at the same time, Jupiter amplifies Pluto’s strength, which echoes the changes Saturn and Pluto bring about together, extending their effect until the end of the year, when Jupiter and Saturn enter Aquarius.

At an individual level, we have the ability to rise (Jupiter) from the ashes (Pluto), rebuild (Capricorn) perspectives and move forward. Some may be in danger of feeling lost or of sinking even deeper into loss and hardships whenever they try to overcome them. Therefore, it may very well be that this series of conjunctions will prove quite overwhelming for many of us. The good news, however, is that we develop a stronger backbone, more resistant to any asperities faith may throw our way this year. It can thus be said that the energy of this aspect is somewhat more malleable than Saturn and Pluto’s, in the sense that we enjoy more free will in terms of how we use it. Indeed, the challenges could be quite large, but the capacity for reinvention is directly proportional.

The year 2020 ends with a final conjunction, this time between Jupiter and Saturn in the first degrees of Aquarius. An astral event that takes place every 19 years or so, the meeting of the most distant planets known to the ancients has had a disastrous effect on many of American presidents. With the exception of George W. Bush, eight White House leaders have died or have been close to dying sometime around this astral event, as astrologer Daniel T. Ferrera has shown. Although the same phenomenon has not been observed in Romania, it is expected that the next legislative elections that may take place at the end of 2020 will be a source of big surprises, which will reflect at least to some extent the important vibration change expected to occur in the second half of December.

At a personal level, we may feel quite strongly the antagonistic forces brought about by this conjunction that speaks of growth (Jupiter) through privation (Saturn). Those who experience the largest number of challenges in trying to implement social projects (Aquarius) may achieve the best results this year or enjoy the best first half of 2021, managing to pile on success after success. Shy signs of a greater openness to alternative lifestyles may also be observed, most likely driven by a more pronounced sense of empathy towards the disadvantaged groups of today’s society. It is also possible that non-governmental organizations will become more and more active and even receive more support from civil society, despite the obstacles they may be faced with.

On March 22, Saturn moves from its nocturnal domicile, Capricorn, to its diurnal, Aquarius, where he returns on December 17, after a nine-month retrograde journey that brings it back into the previous sign. Although its Uranian energy is felt on and off this year, it is nonetheless strong enough for us to get an idea of what awaits us in the approximately two and a half years it will spend in this sign. If we judge Capricorn as the first house of Saturn and Aquarius as its second, we could say that the entry of this planet into this sign coincides with the beginning of a period when the unequal distribution (Saturn) of resources to the most influential people (Capricorn) will be brought to light by non-governmental organizations (Aquarius) and blamed by the civil society, which may coagulate in revolutionary movements.

At the individual level, we may be that people will be more willing to accept the shortcomings and precariousness (Saturn) of self-employment (Aquarius) than the unsatisfactory wages and lack of perspective of a job in a multinational company (Capricorn). More and more people could flirt with the idea or even choose a freelancer career instead of a job in a large corporation that does not give them the opportunity to develop and make a real contribution to the communities they live in. It is therefore possible to place a higher emphasis in our quest for a career path on the impact it has on our self-development and on fulfilling the ideals and collective visions of the employees. Leaders should take more interest in their perspectives and strive to provide them with ethical and sustainable working conditions.

Jupiter enters Aquarius: unite, unite, wherever you come from

Just two days after Saturn’s second arrival in Aquarius, Jupiter also arrives in the same sign. Due to its entry into this sign and especially with the formation of its conjunction with Saturn, which takes place two more days after its entry into Aquarius, we could witness the formation of some social movements fighting against the statutory and financial inequity of certain disadvantaged groups. Against this background, new experiments of an economic nature and regarding state-run social protection policies could be explored and implemented. Chances are high that the beginning of 2021 will bring about the development of programs (Jupiter) for disadvantaged communities (Aquarius), which have hitherto been forgotten by the authorities (Capricorn). Civil society will make sure to put significant pressure on the fulfillment of these promises.

At an individual level, Jupiter’s entry into Aquarius brings with it the desire for greater (Jupiter) social involvement (Aquarius). More people might consider enrolling in volunteer programs or projects that have a direct effect on the community. Groups can coagulate more easily around an ideal or shared vision, which is why more people may flirt with the idea of opening a business in association with other people, funded at least to some extent through sponsorships or initiatives such as crowdfunding. It is also possible to people will enroll more often in professional retraining courses, a sign that more and more people are turning to professions that are dependent on technology or are rooted for their existence on data services such as the Internet.

All three personal planets go through at least one retrograde period in 2020. Mercury, for example, experiences three such reverse motion intervals, with the first and last covering two signs. In the first decade of the year, it teaches us that in order to be able to forgive (Pisces), we must first appreciate our and others’ quirks (Aquarius). In the summer, it calls us to re-evaluate how we communicate with our families (Cancer), while in the autumn, it make us rethink the foundations (Scorpio) of the most important relationships in our lives (Libra).

Venus, on the other hand, retrogrades only once in 2020, and the sign in which it appears to move backwards is that of the Gemini. At the end of spring, it seeks to show us how much we need to make use of charisma and charm in our social interactions (Gemini). Mars, like Venus, retrogrades once as well in 2020, and from autumn onward, its goal is to show us what happens when the fuzzy boundary between individualism and selfishness (Aries) is crossed.

At the end of this year’s spring, Jupiter moves in an apparent reverse motion for about four months thorugh the sign of Capricorn. During the summer months, we may witness abuses of power by government institutions. It will hardly be a surprise if the law is interpreted in favor of corrupt officials, which will scandalize public opinion. On a personal level, it is expected that Jupiter’s retrograde movement will have a detrimental effect on those natives who seek to develop professionally. The pace they have maintained thus far may be quite difficult to cultivate during the summer months. This is why they might stagnate at this level.

Overlapping its retrograde period, Saturn assumes a similar trajectory. Unlike Jupiter, however, this planet’s retrograde journey crosses two signs: Aquarius and Capricorn. At a collective level, this return in the previous sign speaks about the fact that there can be no genuine renewal of social policies without solving the remaining problems of the current system of government. Therefore, in the summer months or even in the middle of this season, we may witness surprises in the political landscape. On an individual level, this retrograde period speaks of breaking free from the influence of certain authority figures and of growing among those who inspire us.

In lieu of conclusions: everything old is new again

The year 2020 promises to be a special one from many points of view. On the one hand, chronologically, it opens the second decade of the second millennium. On the other hand, its digits represent, according to Doreen Virtue, a quadruple angel number, which encourages us to practice compassion, diplomacy, respect and adaptability at all times. Reduced to a single digit, 2020 reveals the energy of 4, which challenges us to form healthy habits, long-standing family traditions, and to consolidate our future and status in society. This decade promises to take us far and help us embark on exciting adventures, but what 2020 in particular is trying to teach us is that we need a solid foundation in our lives and a refuge where we can always stop and catch our breath. 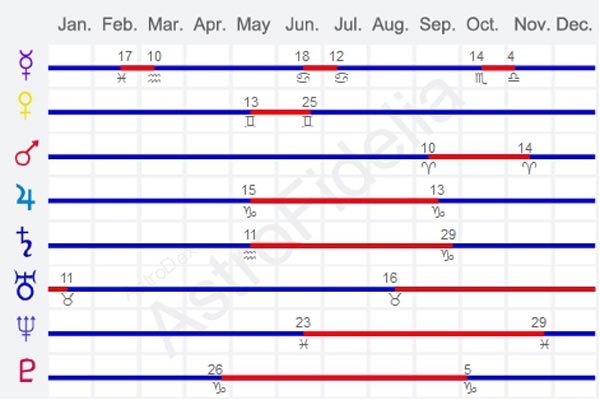 If you plan on doing some research on a particular topic and/or you want to deepen your knowledge of something new, focus on these activities when Mercury transits through the Fixed signs (Taurus, Leo, Scorpio and Aquarius).