A Parallel Between Oracle and Tarot Cards

Oracle cards have become an increasingly popular card divination method. Many of you have probably heard of or seen them. In order to draw a parallel between Oracle cards and the Tarot, we've come up with a short description for the former type of cards.

Oracle cards, irrespective of their kind, are well-known throughout the world and they have been used for hundreds of years as a means of divination. Today, they are considered to be one of the most popular card divination techniques in the entire world.

Because many of you are probably more familiar with the Tarot, we've comprised a list of similarities and differences between this card divination method and the Oracle cards. 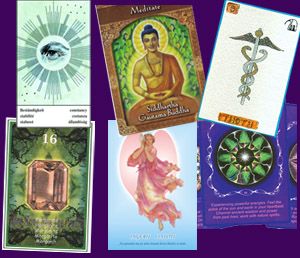 Therefore, as opposed to the Tarot, Oracle decks:

But there are also similarities between these two card divination techniques:

The majority of Tarot and Oracle readers use more than one decks, depending on the querent's problem and their personal preference.

Many Oracle decks are improperly labeled as Tarot cards. Therefore, when you plan on purchasing either type of decks, it's important to double-check whether it's an Oracle or a Tarot deck.

A Tarot deck can successfully replace the Oracle cards, but an Oracle deck can never be used as a Tarot one.

When the Moon transits through the Mutable signs (Virgo, Gemini, Sagittarius and Pisces), it's time for you to make some adjustments to the DIY home improvement and/or remodeling projects already under way. It'd be a good idea if you asked your partner, best friend or a close relative's advice and/or opinion on this matter.