In a less challenging climate than last year, 2022 invites us to continue the implementation of large-scale reforms. This way, we need to adapt our individual rhythm to the broad process of collective change in which we have been engaged for some time. As new structures make their way into our lives, we learn to build freer and modern approaches, while our value system is undergoing a strong transformation.

A key to this year is the alignment to the natural and simple style of Taurus, the sign that Uranus continues to activate, accompanied by the transiting North Node. We are patiently stabilizing and strengthening recent major changes. At the same time, Jupiter’s celestial movement divides the year into three distinct periods: the beginning and the end of 2022 are under the signature of Pisces, while the middle of the period bears the dynamic imprint of Aries.

Jupiter’s transits through Pisces and Aries: every ending means a new beginning

As last year, Jupiter swings between adjacent signs, which means exploring completely different values and strategies (all successive signs are quite contrasting). By May 10, we’re talking about a first part of the year when Jupiter quickly passes through one of its domiciles, Pisces. Later, it will activate the first degrees of Aries until October 28, and afterwards will return to Pisces for about two months, until December 20.

Jupiter in Pisces. Thus, during the times of Jupiter in Pisces we will be drawn to spirituality, art, mysticism and other instruments through which one experiences the feeling of refinement and high idealism. Jupiter in Pisces induces a broad, collective state of sensitivity. Empathy is more obvious during these months, as does the desire to offer our support to those in need.

In mid-April, when Jupiter and Neptune form a perfect conjunction in their domicile sign, we will have the chance to largely experience the power of this impressionable and modest archetype, sometimes prone to confusion and deception, but always benevolent. A meditative and contemplative mood will make its presence noticed. Imagination is one of Pisces’ keys, but it is up to us whether we will use it in a visionary, positive, evolutionary way or turn it into an exaggeration of vulnerability, victimization, escapism.

With the help of Jupiter in Pisces, we can witness a collective healing process, one that comes mainly through emotional cleansing, universal love and transcending our egos. This transit helps us to find a higher meaning through intangible values. Inner fulfillment, tranquility, spiritual practices become more important than any worldly glory. AstroFidelia recommends considering Jupiter’s transit through Pisces an opportunity for making synthesis: we can essentialize our previous experiences, seeing our lives in a holistic manner, drawing conclusions, letting go of old habits and taking big steps further, to a new level of our consciousness.

Jupiter in Aries. In a completely different fashion, from May 10 to October 28, Jupiter will turn on the Arian energy, talking about new beginnings and acts of courage. Gradually, we start flirting with the idea of risk and challenge. In the name of honor, we accept fights and competitions much more easily. With Jupiter in Aries we enjoy acting on our own, having great confidence in our inner visions. During these months, we might witness an abundance of new ideas and onsets for which there is no precedent. Stubborn and restless, we will act with more spontaneity, but we can also become too direct, stressed, anxious, hasty, sometimes even aggressive. On a personal level, we can make the best of Jupiter’s transit through Aries by intuitively aligning ourselves to new evolutionary stages.

Throughout 2022, Saturn continues its transit through Aquarius started in December 2020. Its pressure will be less uncomfortable this year than the one imposed by the 2021 squares to Uranus in Taurus. Still, a certain tension from this planetary alignment in fixed signs is preserved. On a both personal and collective level, we continue to make important changes, but in a controlled, cautious, organized and responsible way. At its best, this dialogue between innovation and rigor can result in lasting modern structures. Nevertheless, we could also witness certain attitudes that seem rather eccentric and extremist.

One of Saturn in Aquarius’ lessons is accepting alternative lifestyles. We need to sincerely tolerate habits very different from ours. However, this does not mean saying yes to absurd experiments or turning the lack of prejudice into a lack of order. Technological progress can be life-saving, but it can also lead to some deviations that we need to evaluate intelligently, with visionary understanding. With Saturn in Aquarius, it is also not out of the question to encounter some forms of mental rigidity that block real progress.

A good response to Saturn in Aquarius would be to join large groups of people who share our values. It is good to keep in mind that some of the challenges around April 21, when Saturn will form squares with the Lunar Nodes, are meant to help us overcome obstacles that we would not have dared to face otherwise.

Although, as mentioned above, the critical points of the Saturn-Uranus square (Aquarius-Taurus) have already been overcome in 2021, the two planets continue to build an interesting dynamic. Saturn is in the domicile sign of Uranus, Aquarius, while Uranus himself is in a sign quite contrary to its rebellious nature. Uranus in Taurus thus speaks of revolution through simplicity and naturalness, but in new, progressive forms. While we are witnessing, for example, the wide implementation of new technologies and solutions, Uranus in Taurus requires a solid contact with nature and sustainability.

As much as we can evolve intellectually, so much we can explore the intelligence of our physical bodies and instincts. We can also witness unexpected changes from an administrative-financial point of view. Our relationship with money and possessions changes. There is a need to simplify our value system so that we develop a certain inner robustness which comes from natural tastes. We are learning that abundance means more freedom, more time for ourselves, and more tranquility.

Mercury and Mars’ retrograde cycles: reconfiguring our style of thought and action

2022 starts under the influence of Venus retrograde in Capricorn. Until January 29 we should take into account revisions in relationships and financial strategies. More withdrawn and solitary than usual, we have the chance to re-evaluate our partnerships, to see in a new light what we want from a partner and what we are willing to offer in return.

Mercury has three complete retrograde cycles this year, at the border between air and earth signs: January 14 – February 4 (Aquarius-Capricorn); May 10 – June 3 (Gemini – Taurus); September 10 – October 2 (Libra – Scorpio). Its themes include making closer analysis of how we understand technology and implement new procedures (Aquarius – Capricorn); evaluating how we collect a variety of new information and act like eternal curious students (Twins – Taurus); collaborating with others for a penetrating, incisive understanding (Libra – Scorpio).

2022 also means the retrograde cycle of Mars to Gemini, a configuration that will run from October 30 2022 to January 12 2023. This transit is about rethinking our style of action, self-assertion and fight. The way we use words and intellect to achieve various personal victories will be subjected to careful introspection. At the end of this process, we are expected to better understand the idea of efficient mental activity: less energy wasted in worries, conversations, superfluous reasoning, more inner clarity and productive actions.

Jupiter and Saturn retrograde cycles: at the border between individual and collective

If Aquarius and Pisces mean groups, social movements and how we perceive collective phenomena, Aries is the first stage of a new cycle, signifying self-centered focus. Jupiter begins its retrograde period from this self-centered position: from July 28 to October 28 it transits Aries, then re-enters Pisces and finally turns direct on November 24. During these months we will reflect on our philosophy of life, re-formulate our principles and moral judgments, seeing everything from an original and holistic perspective.

Between June 4 and October 23, Saturn will also be retrograde, giving us time to contemplate our inner structures. What are the rules by which we build our progress? How rigorous and consistent is our search for inner freedom? How well do we manage to implement new directions in our lives? What debts have we accumulated lately and how do we correct them? These are the questions for which we will see clearer answers in the months with retrograde Saturn.

In conclusion: our individual development depends on how we support collective evolution

From a wide perspective, 2022 seems a more peaceful and de-stressed year than the previous ones, but that does not mean stopping from building new structures in our lives and communities. Even if the months with Jupiter in Aries will urge independent actions and rapid advance, Saturn in Aquarius will not allow us to ignore the idea of collective progress, implemented with patience and respect for all humanity. Numerologically, we are talking about the influence of "6", a year in which we must be prepared to help those around us, to show generosity, goodwill and altruism at high levels. In the name of harmony and cooperation, we can demonstrate an incredible nobility of spirit. 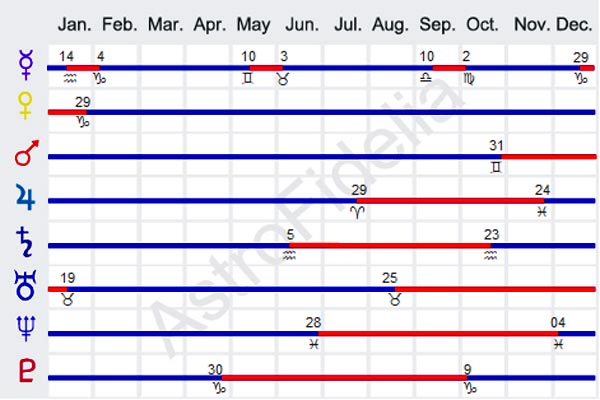 Every seven years (i.e. a quarter of a cycle of Saturn), the focus and the energy shift in each person's life. If you find yourself at the beginning or the end of a seven-year cycle, use your time wisely and make inspired decisions about your future.